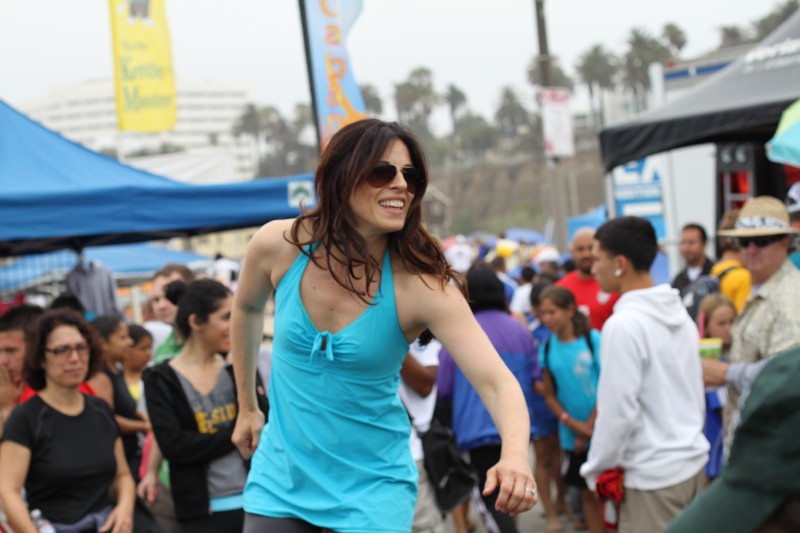 Sara Tanz grew up in New York City and has been dancing for as long as she can remember. Her early training in jazz, tap, ballet and gymnastics opened the door to the world of movement which has always played an important role in her life. She has performed in NY’s Lincoln Center, Carnegie Hall and Town Hall.

After high school, Sara continued to study ballet at the University of Rochester while receiving a B.A. in English Literature and Theater Studies in 1995. Meanwhile, her interest in dance expanded to less formal venues – like rocking out at frat parties! Loving the group dance experience eventually led Sara to discover “Nia,” a healing and expressive fitness technique, at Equinox in NY, and to earn her Nia white belt certification in 2000.

Also in 2000, Sara received her Masters in teaching English at Columbia University, where she focused on movement and creative writing. This lead Sara into the classroom to teach high school English as well as movement programs in New York City. Sara began to teach movement classes all over the city.

In 2004, Sara moved to Los Angeles, married entrepreneur and producer Larry Tanz, (whose last name means “dance” in German,). She got her start in the LA dance world with a studio internship at Swerve Studio with Gillian Clark and Teigh McDonough, appearing in a Yoga Booty Ballet instructional video. Ultimately Sara would launch her Mama’s Dance Party at Swerve Studio in 2008. Since getting started in LA Sara has taught in dance studios and gyms, schools, camps and community organizations from Malibu to the South Bay.

After studying movement for years, Sara developed “Dance Your Dreams,” an endorphin-charged workout set to inspirational world music. Now a mom, and always looking for fun ways to spend time with her amazing children and husband, Sara developed “Mama’s Dance Party,” the unique workout for parent and child.

Most recently, Sara added Zumba fitness training to her repertoire. It is fast and fun, and burns calories! Being part of the Zumba wave is exhilarating.

Sara’s mission is to share with YOU the joy and freedom that only dance can bring!

She currently teaches in Los Angeles.